(The Swedish name of the blog is "CargoLek", means Cargo play, but it did not sound so good in english.)

In my over thirty years of service at the world's largest provider of cargo handling equipment for shipping, I've been through a lot of interesting experiences. Some I have documented over the years.
Some are not appropriate to publish, so I've picked out some "half acceptable" stories to share with you in this blog.
The aim is to spread joy among my colleagues and other interested parties. Do you feel wrongly described there are no evil intentions. Recall that the memory can sometimes play tricks on us.
For the uninitiated, we work with RoRo equipment. Roll On Roll Off, such as bow visors, bow ramps, stern ramps, internal doors and ramps, etc. on ships. Even port facilities are among our products.

WHO ARE YOU TRYING TO CONFUSE?

It is not so easy to write instruction manuals, gods know. The all more complicated manuals involve linkspans and passenger gangways, or on normal language: Land based vehicle ramps for connection to the ship and complicated walkways for passengers. Ferry berth in other words.

Bill Gair, a skilled Englishman with strong opinions, was project manager for such a facility. I worked hard to try to interpret subcontractor’s amateurish and completely incomprehensible instructions and drawings. Finally, I got to something that even I understood. For a final check that everything was included and not too many or unnecessary lies inserted, I put the manual on Bill’s table for a review. A few days later is the thick manual on my table with a single comment written in large red letters across: “WHO ARE YOU TRYING TO CONFUSE?”

There are many opportunities to make your mark on various more or less official documents. Once I help someone do a little better looking picture of a ship that was the subject of a presentation. I remember sadly not any vessel or to whom I made the picture. True to my habit I had to do something a bit extra. To place a nude cycling lady on main deck was transparent and would be discovered by the presenter to the likely outcome that the lady in question would be deleted. What do you do? Well, lifts a series of signal flags from mast to mast! Guess what it was? Yes!, “Arne Franklin”. Unfortunately I cannot find the picture of the ship in question, but the flags I had saved among my “nice to have documents”


What goes on in my mind? 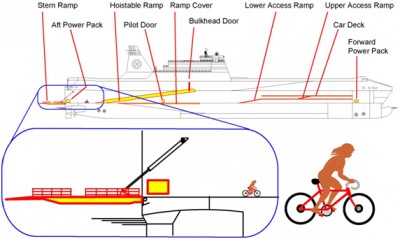 Some days ago, I would do a job for Thor Ficaria (IMO 9320568) and took out the manual I made a lot of years ago. The first thing that pops up is an overview of the ship. But what was it that dwelt aft on the main deck? A girl biked ahead in dressed like Eve in paradise. What did she do there with no clothes? My father sometimes said that “what you think of, of that the mouth speaks.” Apparently, this also applies when drawing.

When I think about it really carefully, I think I may have been a little provocative now and then. But there are circumstances where I performed with the best intentions an unofficial project which turned completely wrong. So it was with the instruction manual for the cup holder MuggGregor. (Mugg is the Swedish word for cup) It stood paper cups all around the coffee machine in the coffee room at the 6th floor. To get some order in this mess, I manufactured a cup feeder where to pick up cups manually. I must highlight that I actually built the piece at home. But then I thought it was appropriate to test a new technique for producing instruction manuals. So, I persuaded Lennart Gustavsson to be actor when photographing the device operation. With the photos help I produced one of the best instructions that has been produced at MacGregor. I was actually really proud of the result. But, say the happiness that lasts forever. Suddenly I awakened from my half-sleep in front of the computer screen by the personnel manager Agneta Tärnevald and my manager, Rolf Christiansson. It was plain speaking. If I dared to perform such prank again, I would get fired on the spot. I guess I should not train myself in making manuals in such a conspicuous way. Then I kept quiet for several days before any new fantastic idea popped up.

Here is the instruction manual:

The logotype is a little odd. Look a bit closer: 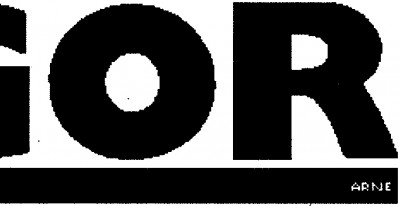 The instruction manual for the internal bow door on the Lion King.

How the logo ended up here is a mystery 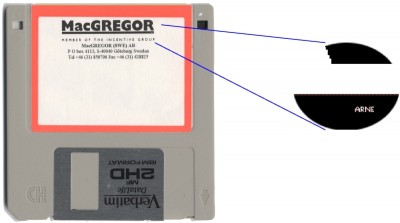 MacGregor’s official label to paste on diskettes that were sent out into the world.

I have a firm base of reputation to be unable to let things alone. Perhaps deservedly so. A proof of this theory is that I put small traces of myself all around. For example, in the MacGregor logotype. When the company changed its name from MacGregor Navire to MacGregor we should put the logo in the all documents. The electronic edition of the logo that we had access to were in a deplorable state. Blurred by the edges it was a disgrace to the company. So we could not have it! I drew the contours by drawing up the program Freehand, (equivalent to Adobe Illustrator) and then exported it to tiff format. This meant that the logo consisted of two colours, red and white or black and white with no midtones. Distinct and clear. For that I would keep track of the logo was the correct one, I wrote the word ARNE in individual pixels at the bottom right. This logotype ended up in some inexplicable ways in the different templates. For example, the cover page of drawing binders. Several staff members discovered a small white object in the corner of this logo. Jonas Karlsson, who was a consultant at the time, zoomed in the white dot and found that it actually stood ARNE there.


Second place in the Naviread

Many years had NIFF (Navire Athletic and Recreation Association) a race in Optimist dinghy sailing, Navireaden. This is a popular feature that provided the opportunity for lots of laughter and wet colleagues. I had not been involved in sailing, because I had never been in such a small sailboat. Actually almost never in any sailing boat at all. But at some point it must be the first. I got a theory lesson on land and a lot of good advices. Sail there, turn there, pull the rope every now and then to release it later on. I was, in other words, theoretically perfected. Now I felt that all these good advice would not be enough to take home the victory. So I figured out a plan. Lars-Åke Pihlqvist ​​, “Pilen” (The Arrow) and Göran Hugon started in same starting field as I did. These two sailing freaks took the contest deadly serious, and one of them would win the race. Or die. Thus it was necessary to make a quick decision. I would follow one of them and do everything exactly the same as he did. Now I ended up right next to Pilen when the starter shot was fired. Pilen made a burn out and set off with a flying start as the water gushed around the bow. I hooked on. As strange as it may sound, I managed to keep my place a few feet aft of his water craft. He suddenly veered off in a completely different direction than the rest of the pack headed by Göran. What the hell, I thought, it will make or break, I continue to stalk Pilen. Imagine my and everyone else’s surprise when it turned out that I came in second! Although some sailing freaks hummed about cheating, but there was no rule that forbade anyone to play “follow the arrow”. So I got my medal the first time I sat in an Optimist dinghy.

Many of my memories are from Oskarshamn new building 419. On the control panel for the scissors elevator happened to be a button to much. What it was intended for, I don’t remember, but it’s impossible to have a push button sitting without being used for something meaningful. I made a nice sign saying “Do not push this button” in large letters. Then I connected the button to the giant bell that should sound when the lift was operated. It was not long until the bell rang and a man quickly left the control panel and looked around to see if anyone noticed him. The bell rang many times. Finally the clock was filled with old rags to muffle the sound. And it was just as well, because otherwise the operator of the elevator would have chronic tinnitus.

My former team manager Halvar Nyström sat in the room next to me on Navire in Hisingehus. I knew he was radio operator during his military service and was skilled in Morse telegraphing so I got a whim to test him for fun. It was easy to trick Scribona word processor to do everything possible and impossible. Among much else, I managed to program the warning beep such as changing the length of the signal. I made a small program that translated a written text into Morse signals. Then I wrote “HALVAR NYSTRÖM” and started the program. Scribona Morse’d fairly quiet and at a leisurely pace that name again and again until Halvar came through the door with a dazed expression on his face. He had been engrossed in a calculation of a steel structure and suddenly waked up with his name ringing in his ears. It appeared that he had been somewhat confused by the incident.

An engineer with too much humor and disposition of tampering for my own good.